These were two different challenges, but I solved them with similar methods.

This challenge is a simple reverse challenge that takes our input as a parameter ./dec_dec_dec flag_string_is_here, encrypts it with some functions, and does a string compare to the encrypted flag in memory. Upon reading the decompiled code, I saw that it encrypted the flag with three different functions. It was quite late in the night when I did the challenge, so I didn’t feel like doing any static analysis. (After the solving the challenge, I realised that static analysis would have been an easy way to solve this too). Instead, I tried this challenge as a black box encryption challenge. I threw some random input as a flag and looked at the encrypted output. I noticed that the longer the flag we gave it, the longer the encrypted text, so it was unlikely that these were some hashing functions.

When I see such types of encryption, I always try to get a partially correct answer. Since we know that the flag format is TWCTF{flag}, I tried to encrypt TWCTF{AAAAAAAAAA}

To facillitate this bruteforce, I wrote a quick gdb script that extracts the encrypted strings, so I wouldn’t have to reimplement the encryption functions. Then I used a python script to keep calling the gdb script and parsing the output. This gives us the flag!

After seeing the flag, I felt quite stupid for not doing static analysis lol.

Note: You can encrypt up to 100 messages “per once connection”.

Similar to dec_dec_dec, the flag is encrypted and we are shown the encrypted flag. However, each time you connect to the service, you are provided with a different encrypted flag. We know that the flag has to always be the same, so this indicates that the encryption uses some sort of key. Like earlier for dec_dec_dec, since the encrypted string changes length with our user input, I guessed that it should be any hashing algorithm or something of that sort. So I send a partially correct flag again and see the output.

Oh no. There isn’t any noticeable similarities between the encrypted output and the correct one. But it’s still too early to give up, so I guess that maybe the input length is significant in this form of encryption, and I try different lengths of the same TWCTF{...} string.

Jackpot! Given a flag of length 47, the encrypted output seems very similar, with both having Jo7ML2Tw the same, at the start. Since we know that only the start of our input is correct, it makes sense that the start of the encrypted output is correct. This encryption algorithm thus is quite similar to dec_dec_dec in the sense that each correct character would lead to more correct characters in the encrypted output. Knowing this, we use a similar technique to bruteforce the flag. I also improved my script so that I could perform the two-character brute a bit more efficiently. I modified the script by hand for each iteration but it was quite brainless work so it was not that difficult. My work flow looked like this. 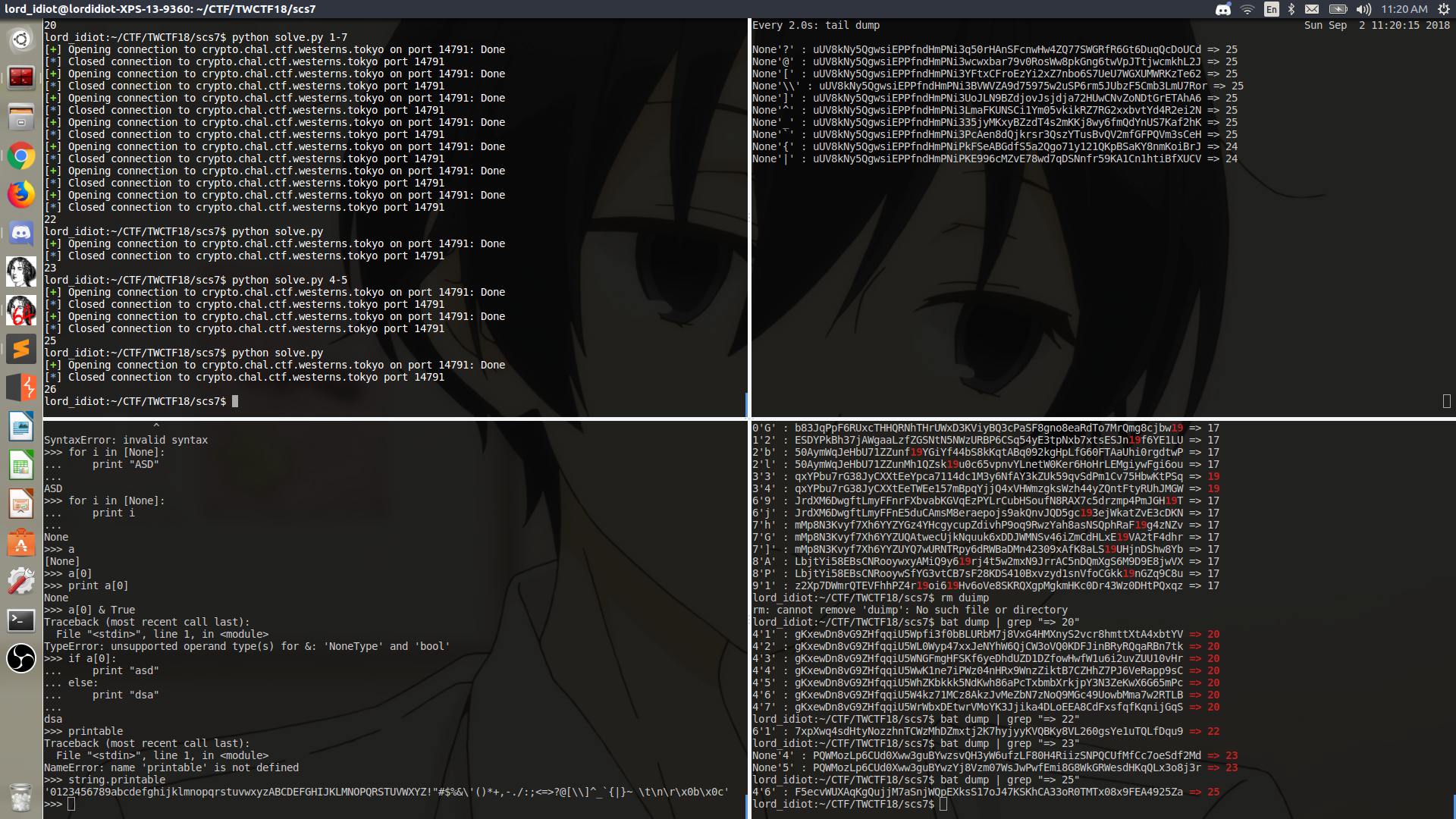